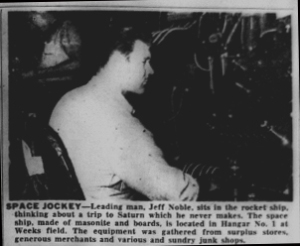 If Zimbalist had shut Tucker out of what should have been his for directing and initiating the film, it would be in keeping with the lack of emphasis on him in the trades.  But while rumor has long had it that Tucker was suicidally despondent over the situation, the surviving evidence suggests otherwise.  In the May 26Hollywood Reporter, almost precisely one month before the Robot Monster premiere, he was already announcing his next project:

Tucker will produce and direct the feature, to be made in Pathecolor. . . .

Cecille Reynolds was apparently gifted with the same luck as Zimbalist’s protégé Guy Reed Ritchie, since his name is non-existent in the credits of finished movies.  Likewise, most of the other members of American Artists Film Corp.—Housch, Lee, and Rykoff—have no credits to their names.  The project went unmentioned for weeks, but then boldly reappeared on page one of the June 24 Reporter, the very day that Robot Monster premiered in Los Angeles:

Return to Earth, a science fiction feature to be produced and directed by Phil Tucker in 3-D, will be made in three sections—black-and-white, red, and green, Tucker announced yesterday.  The story of space travel will have the Earth sequences in black and white, the Mars sequence tinted in red and the Venus section tinted in green.

The picture will be made under the banner of American Artists Film Corp., of which Sam Leacock is executive producer.  It rolls July 10 at Eagle Lion.

Return from Mars’ Pathecolor film process was noticeably absent as the project metamorphosed into Return to Earth.  The option of using monochrome film with alternating tints for different locations was economical, and was a technique that went back to the silent, pre-color era when it was a common way to add color to black-and-white.  Knowing Golden Age movie men like Gordon Avil, Tucker had likely put the technique away in his mental bag of cinematic tricks to be deployed one day.  But there were also very recent uses of color tints in theaters, and their connection to Tucker’s new project is unmistakable.  The atmospheric 1950 Lippert release Rocketship X-M told the story of a doomed moon mission that instead reaches Mars, the black-and-white film featuring a red-tinted section when the crew arrives on the red planet.  Then in 1951 Lippert released Lost Continent, and while that monochrome film did not take place on the planet Venus, the lost continent scenes were tinted green.  Both films featured the same V-2 rocket footage used in Robot Monster.

Whether or not Tucker might have gotten into a jam with Lippert Pictures over a close appropriation of a gimmick from two of their biggest releases is a moot point.  Return to Earth was never again mentioned in the 1953 Reporter, and Tucker was never mentioned in any capacity in all of 1954.  (Daily Variety gaveReturn to Earth a brief mention, when George E. Phair noted, “With all those science fiction films hopping to Mars, Venus and other express stops, up comes a picture titled Return to Earth.”  Phair apparently did not know—or care—that Return to Earth was scheduled to “hop” to Mars and Venus.)  But although no such movie survives, the trail does not dry up.  Tucker solved the riddle of this mysterious film when he recounted the aftermath of Robot Monster:

It did considerably over a million.  At one time, I was going to sue Al Zimbalist to get the money, but I couldn’t find an attorney who would [help].  That’s pretty much the whole story on that, other than I subsequently went up to Alaska and made the worst picture that’s ever been made by anyone, anywhere.

Space Jockey?  What was the film about?  Remember the story?

It was about a brave crew of men who go to Mars and Venus.  And although they don’t make it back, they manage to send back enough information so that the lead can say at the end of the picture, “Now the stars are ours.”

Who acted in it?

I haven’t the foggiest idea.

Given the time frame, and Tucker’s brief summary of the film concerning a Mars-Venus mission, Return to Earth was another name for his infamous lost filmSpace Jockey, mentioned tantalizingly in The Golden Turkey Awards.  Lest there be any remaining doubt, consider how Tucker describes the end of the film (“they don’t make it back”) and compare it to the tragic-heroic conclusion of Rocketship X-M (where the crew dies on impact as they “return to Earth”).  In both films, the silver lining on the gloomy cloud is that the doomed mission has enabled a future of more space exploration.  Tucker had not merely borrowed the red-tinted Mars from the still fresh Rocketship X-M, but blatantly copied the ending.

Having disappeared from the pages of the Reporter as Return to Earth, the project did not reappear there as Space Jockey.  But the story of Tucker’s infamous lost film continues, thanks to the fact that he made it in Alaska rather than, as the Reporter had it in June, Hollywood’s Eagle-Lion studio.  The decision to switch locations must have been made rapidly, because news of Space Jockey began to appear in the Fairbanks Daily News-Miner on July 6:

Plans to start the production of moving pictures in Fairbanks have been announced by the newly-formed American Artists Film Corp., which has established headquarters in this city.

According to Phil Tucker, who is in charge of production for the studio, work will start on a movie to be filmed in Fairbanks starting July 15. The first movie filmed here will be of the “science fiction” type with an Alaska background.

Tucker said that he sees no reason why the production of movies can’t be carried out in the Fairbanks area. He emphasized that the new company hasn’t intentions of filming “Alaska pictures.”

“We are starting a studio here that will film all types of moving pictures, possibly making use of the abundant scenery that is available.  However, our plan is to start a standard film studio that will film every type of movie, not just Alaska pictures,” Tucker said.