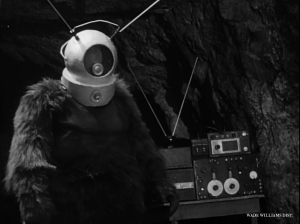 Since 2005, I’ve been researching and writing a book on director Phil Tucker and his 1953 ROBOT MONSTER, the best bad monster movie of all time.  My book I CANNOT, YET I MUST documents the film in detail, but also covers the entire career of Tucker with attention also given to writer Wyott Ordung and producer Al Zimbalist.  The book is over 120,000 words in length, and is finally just about ready to release.

Harry Medved, author of such books as THE GOLDEN TURKEY AWARDS, initially kickstarted the whole thing by telling me that he had an extensive interview with Tucker, and little of it was quoted in his books.  He sent me that material, and virtually the entire 40-minute interview with Tucker is quoted in my book.  I’ve also done an in-depth analysis of the script, drawing out significant differences to the film (the entire shooting script will be reproduced as well).  And there are hundreds of references throughout to the trade journals of the time, other interviews and various other things.

The book will be available soon, and I’ll keep this blog updated as it gets closer and closer.  (I will also just blog now and then about whatever strikes my fancy.  Nothing too serious, just movies and music.  And writing–I am serious about that.)

(ROBOT MONSTER is owned and distributed by Wade Williams, and I’m grateful for his kind permission in using photos and the script in my book.)

Here’s a look at the cover: 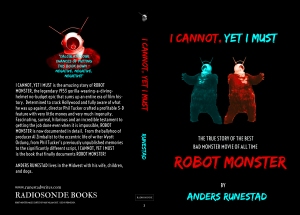