It is my privilege and my pleasure to make a huge announcement.

The script for Phil Tucker’s lost film Space Jockey has been discovered, thanks to a copy of it kept by an original cast member. The film remains lost to the best of my knowledge, but Tucker’s script for his lost film has surfaced.

In September 2019, I was contacted by Tok Thompson, professor of Anthropology and Communication at the University of Southern California. Tok’s mother Donnis Stark Thompson, recently departed, had lived a full and fascinating life that included an early stint as an actress.  And when Phil Tucker shot the lost film in Fairbanks, Alaska during the late summer of 1953, she was part of the cast.  Years later among his mother’s belongings, Tok’s family discovered her copy of the Space Jockey script. Contacting film journalist Phil Hall, Tok was advised to contact me about the script because of my Phil Tucker book I Cannot, Yet I Must.

Thanks to Tok graciously sharing the script, I’ve been able to read it and, thanks to the copyright research of Elias Savada, it’s been confirmed that Tucker’s script was never copyrighted or renewed. As the script is public domain, I am pleased to say that it will be published in the year 2021.  Also, there are hopes of performing it in some manner.

As this project is in development and ongoing, I’ll have more to post as the year keeps rolling on, with a publication date to be narrowed down and announced later. I hope that everyone out there who is a fan of Robot Monster, Phil Tucker’s movies, and cult cinema in general is as excited about this project as I am, and I look forward to you being able to experience this lost original script by Phil Tucker.

For the better part of the past year, it’s been my privilege to be privy to a plan to make an independent movie about Phil Tucker’s making of ROBOT MONSTER. A filmmaker named Matthew Muhl has written a script and outlined a plan for making his film about the March 1953 event, and he has started a Kickstarter fund for this project. To be clear, this movie is not based on my book but is Matthew’s own project with his own script. Head on over, and check out a video he’s put together on the project with narration by original ROBOT MONSTER cast member and all around cool guy Gregory Moffett!

One of the most enjoyable aspects for me in researching Robot Monster was discovering that writer Wyott Ordung had some talent behind the camera and was a good actor. He directed (at least officially) Roger Corman’s first creature feature Monster from the Ocean Floor, while the film was mostly carried onscreen by its female lead, Anne Kimbell. Hers was the main character, and she more than ably pulled it off. From this write-up of her life, she loved the stage most as a performer, as many actors do, and stayed active in theater and the arts all around. Rest in peace.

I’ve been away from the blog for too long, so I’ll get everything up to speed:

–A big congratulations to this year’s Rondo Award winners, announced just this past Sunday night.  My book I Cannot, Yet I Must did not win in its category but I honestly did not expect that it would.  The competition was stiff indeed, and the winner and runners-up are absolutely deserving.  Myself, I’m still just tickled to be a nominee and that I can forever call myself a Rondo-nominated author.

–With Easter recently celebrated and springtime here, it’s time to post some exuberant music.  And I can’t imagine anything more exuberant than this thundering, brain-melting, blistering performance by Simple Minds from Newcastle, England in 1982.  Enjoy!

I am extremely honored–and excited–that my Robot Monster/Phil Tucker book I Cannot, Yet I Must has been nominated in the “Book of the Year” category for the XV annual Rondo Awards! All I can say is (1) please consider voting for me and (2) what this guy said:

Check it out!  Phil Hall is one of the few people to write anything about Phil Tucker’s Space Jockey and I quoted him thusly in my book.  Recently I’ve been happy to make his acquaintance and was interviewed for his wide-ranging cinema podcast, The Online Movie Show With Phil Hall.  It’s a fun little chat, and Phil asks all the right questions about Robot Monster, Phil Tucker, and related subjects.  Many thanks to Phil for having me on!

If you’re a Kindle Unlimited subscriber, you can now dip into my 700-page book on the making of Robot Monster and the careers of Phil Tucker and Wyott Ordung at your leisure as part of your subscription.  Enjoy!

I briefly mentioned this 1949 movie in I Cannot, Yet I Must because it was directed by Merle Connell, one of Phil Tucker’s collaborators. I said that it is a must for anyone who likes a really bad Western. I stand by that statement:

I’ve recently been on vacation, and as part of a family trip almost made it to Bronson Canyon, location for Robot Monster.  I think I was within 1-2 miles, but walking the rest of the way to the caves just was not in the cards in the time I had.

But I did make it to Griffith Observatory, Los Angeles’ landmark astronomy site, located also within Griffith Park.  I’ve had a lifelong obsession with this observatory, thanks to the PBS series Project: Universe, which debuted in 1978 and played at least until 1989 where I grew up.

This is the debut episode, featuring plenty of Griffith Observatory:

More on Project: Universe some other time.  For right now, it’s just good to have made it to the observatory, taken in the Art Deco architecture, and have this photo of a Tesla coil to show for it: 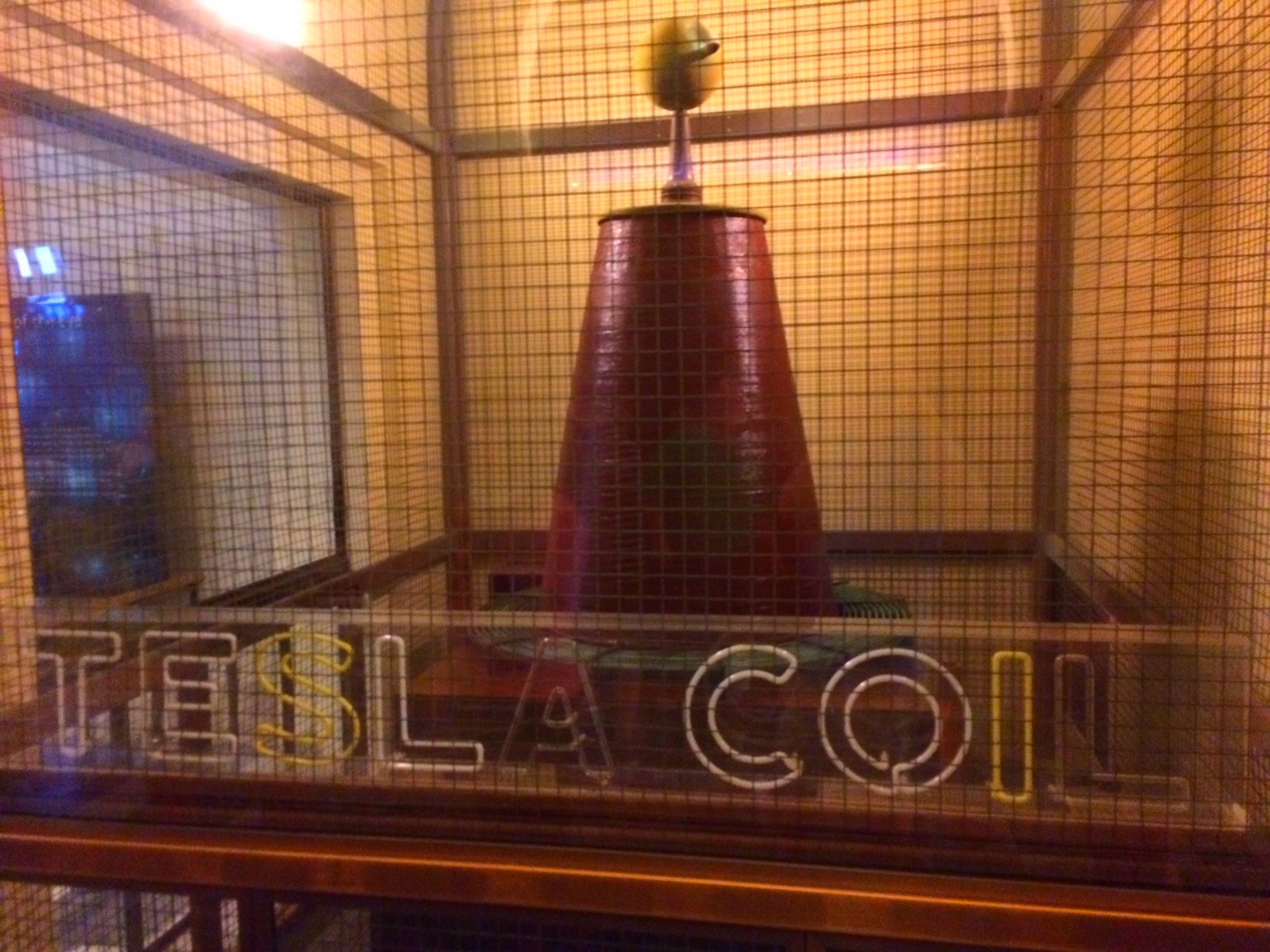 Thanks once more to Jon at Kitley’s Krypt, who previously interviewed me on my book, and has followed up with a very nice and in-depth review! Read it here.