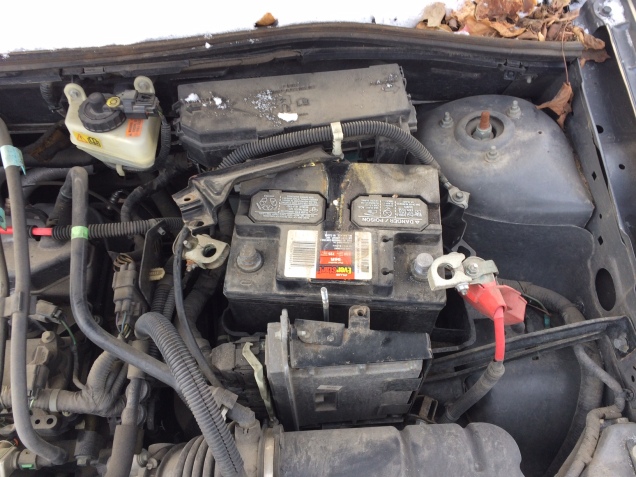 The dead batteries look so much like the living batteries . . . how will we ever recognize the zombie batteries before it’s too late?

At a car dealer, of course.

At least if the car dealer also has an auto shop.

I should have known better and put a new battery in my 2009 Ford Focus, passed on to become a high school kid car, being that I remembered putting in a new battery at the beginning of 2014. But I soon found that I was not the only person to forget thinking about such things in summer when they would be easy to take care of.

For close to two weeks of increasingly cold temperatures, the Focus held up its end of the bargain and kept starting. Only the night before the problem the little car started and I drove it around a few blocks to keep it from grogginess. But that didn’t stop it from refusing to start the following morning, although the battery showed some lingering signs of life with the dash at least lighting up.

I went through the day blissfully assuming that it was only responding poorly to the coldest of our bout of cold temperatures but I soon got the word from home that it was not starting and the battery was well and truly dead.

No matter, I had changed batteries before and could do it again.

So I messed around with my cheap-but-good-enough tools, finding the correct wrench size for each bolt. (I only needed two different wrench sizes, so that part of the job could have been much worse.) The battery was removed and I knew from experience that getting a new one from the local Wal-Mart would fix the problem.

But I never before brought a dead car battery into a store and then lugged it back out.

Wal-Mart did not have my battery, nor did two other stores in my town.